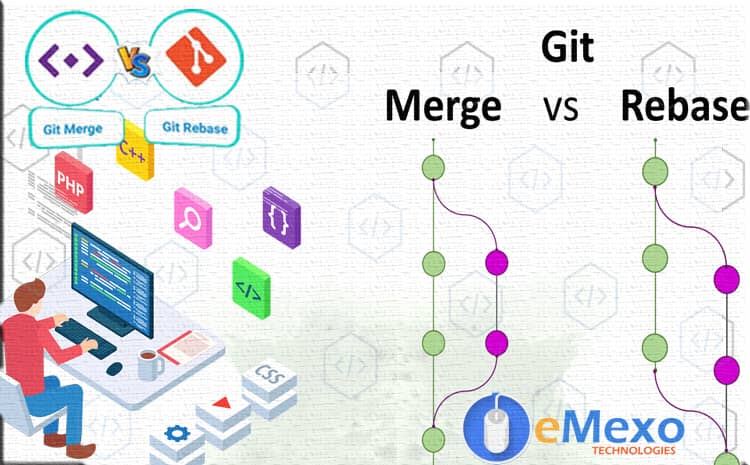 There is a lot of debate about which is better, Git Merge and Rebase. Today’s Git Rebase and Merge blog answers all your questions about Git Rebase and Git Merge. Both techniques are used for the same purpose and are a bit difficult to understand because they are similar. At the end of the blog, learn when to use Git Rebase and Merge.
The GitMerge and GitRebase commands are used to combine the work of multiple developers into a single code. The ultimate goal of these two commands is the same, but their usage is different. Today in this blog, I’ll try to understand Git merging and Git rebasing.

Are you working on new features in your project? You may have created something else a branch for this purpose. But what if you want to add these changes to your master branch? Next, let’s take a look at these commands, as MERGE or REBASE can be useful.

The four master branches commit m1, m2, m3, m4, and the functional branch commits m1, m2, f1, f2, and f3. Now I would like to combine both changes in one place. In this scenario, Merge or rebase commands. Let’s see the difference between these two commands and their use.

2. We got a new piece and created it for this new branch called Feature. This feature branch Commit with data up to m1 and m2.

4. Next, merge the feature branch into the master branch. Use the merge command for this scenario.

Note: While someone else is working on the master branch and committing the code in 2 Commits named as m3, m4.

5. Here we are using the –squash auto-merge option to avoid merge conflicts.

After reviewing the project structure, get all the files from the feature branch. Let’s take a look at the master branch log.

The structure after merging should look like the below diagram. * mc is a merge commit

Note: This is a new scenario based on the merge method. In this scenario, we’ll go back to what the previous project would look like.

Next, check the log of the master branch. Now you can only see the committed m1 and m2 messages.

6. Switch to the feature branch.

7. m4 commits while some other people are pushing to the master code with m3.

Then run git rebase on the feature branch.

Then check out to the master branch.