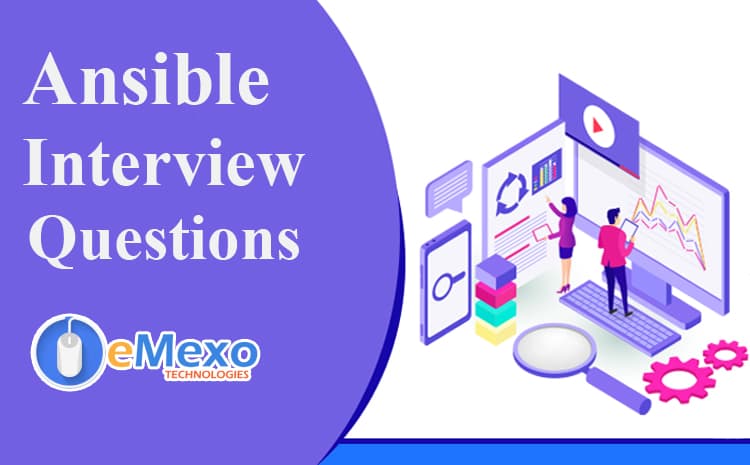 Ansible is an open-source platform that facilitates configuration management, task automation, or application deployment. This is a valuable DevOps tool. Written in Python and uses Red Hat. Finally, it uses SSH to zero downtime to SSH.

2. What is the use of Ansible?

Ansible is used to manage IT infrastructure and deploy software apps to remote nodes. Ansible allows you to deploy your application to many nodes with a single command. However, this requires some programming knowledge to understand Ansible scripts.

3. What are the features of Ansible?

Ansible has the following features:

4. What is Configuration Management?

This is the method you need to follow to keep track of all the updates that flow into your system over a period of time. The technique is also useful in situations where introducing new changes introduces fatal errors into the system. Instead of fixing the error, you can track down and undo the new changes (which caused this error).

5. What is Ansible Galaxy?

Ansible can use Ansible commands from the command line to communicate with configured clients. You can also use the ansible-playbook command to automate the configuration. To create the basic directory structure, you can use a tool bundled with Ansible called ansible-galaxy.

6. What are CD and CI, and what is Ansible’s relationship with them?

By creating software on the CD, developers can release it to production at any time. CI, on the other hand, consists of each developer uploading scheduled integrations on a regular basis (usually daily), resulting in multiple daily integrations. Ansible is an ideal tool for the CI / CD process and provides a stable infrastructure for deploying the target environment and then deploying the application.

The Ansible automation engine is a key component of Ansible and interacts directly with configuration management databases, cloud services, and the various users who create playbooks to run them.
The following figure shows the Ansible architecture:

The components of the Ansible automation engine are:

Infrastructure as code or IaC is a process that DevOps teams need to follow to manage their infrastructure in a more organized way. You must configure disposable scripts and cloud components through a code repository instead of manually configuring them. In addition, it is recommended that it be kept under source control. This improves speed, consistency, and accountability.

9. State the requirements for the Ansible server.

You need a virtual machine that has Linux installed and is running Python version 2.6 or later.

10. What are Ansible tasks?

The task is a unit action of Ansible. It helps by breaking a configuration policy into smaller files or blocks of code. Using these blocks, you can automate a process. For example, to install a package or update software:

Yes, Ansible has a concept of roles that help create reusable content. To create a role, you must follow Ansible’s rules for directory structuring and file naming.

A YAML or file is like a formatted text file with some ruleset, like JSON or XML. We use this syntax for playbooks because Ansible is more human-readable than any other format.
Here are some examples of JSON and YAML:

Using this web-based solution, other IT teams can access Ansible via a user-friendly UI (user interface). Tower’s primary function is to act as a hub for all automation tasks in your organization, allowing users to monitor their configurations and perform rapid deployments.

Tags are attributes that specify the structure, game, task, and role of Ansible. If you need a large playbook, it makes more sense to run only a part rather than the whole. The site uses tags.

16. How to create an empty file with Ansible?

To create an empty file, Ansible uses a file module. To do this, you need to set two parameters.

First, you need to set the ProxyCommand in the ansible_ssh_common_args inventory variable. Because this variable is added to the command line for sftp, scp, and ssh, all the arguments are passed to the associated host(s). For example:

To create these jump hosts, you need to add a command to ansible_ssh_common_args

That way, if you try to connect to any host in the gateway group, Ansible will add these arguments to the command line.

The user initiates an ad hoc command to initiate an action on the host without using the playbook. Think of it as a one-shot command.

19. What are the variables in Ansible?

Here we have defined a variable called port_Tomcat and assigned it port number 8080. Ansible playbooks can use such variables.

20. Explain how you can disable cowsay?

If you have Cowsay installed, you can disable Cowsay by running a playbook in Ansible using two methods:

No, Ansible cannot manage Windows Nano Server. This is primarily due to a lack of full access to the .Net framework used by internal components and modules.

22. What are callback plugins in Ansible?

The callback plugin basically controls most of the output that you see when you run the cmd program. However, it can also be used to add power. A log_plays callback logs playbook events to file, and an email callback sends an email when a playbook error occurs. You can also add custom callback plugins by placing them in the callback_plugins directory, role, or one of the callback directory sources configured in ansible.cfg next to the play.

23. Explain the difference between a playbook and a play?

Ansible has hundreds of modules that support AWS, some of which include:

25. What is the method to check the inventory vars defined for the host?

This can be done by using the following command:

If you just want to access existing variables, you can use the “env” lookup plugin.

Accessing the values ​​of home environment variables on the management machine:

Rather than storing passwords as playbooks and roles, the Ansible Vault stores sensitive data as plain text. Individual values ​​in structured data files or YAML files can be encrypted with Ansible.

To encrypt a file

And similarly to decrypt

In Ansible, handlers are similar to regular tasks in playbooks, but only when the task notifies the handler. Handlers are automatically loaded from roles/<role_name>/handlers/main.yaml. The handler runs once after completing all the tasks in a particular play.

29. Explain the concept of blocks under Ansible?

Blocking allows for the logical grouping of tasks and in-play error handling. Most of what can be applied to a single task can be applied at the block level. This also makes it much easier to specify common data or instructions for tasks. This does not mean that the directive affects the block itself, but is inherited by the task enclosed in the block. And it applies to the task, not the block itself.