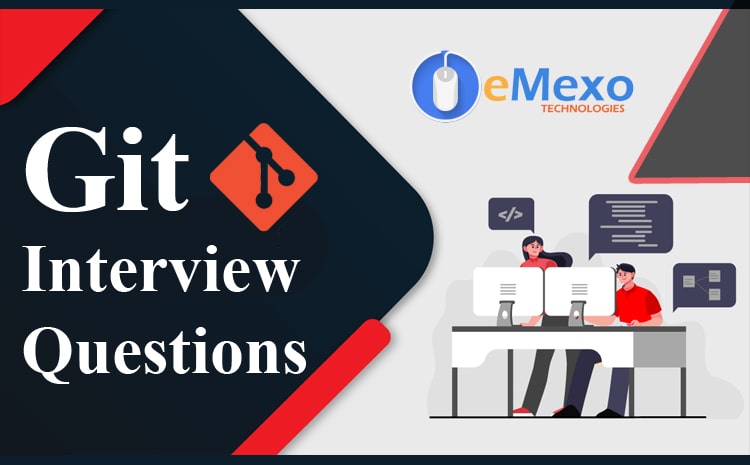 Git plays an important role in various organizations as it is one of the best source code control systems. Today, there are over 40 million Git users worldwide. With features such as task management and bug tracking, Git is an efficient technology used by most industry professionals today. So enroll now with Git Certification Course at eMexo Technologies and start your career with Git. After some discussion and research, we’ve put together the following list of Git interview questions that helps you to crack your interview.

We encourage you to try this question by first talking about Git’s architecture, as shown in the figure below. Try to explain the figure by saying:

2. What is the difference between Git and GitHub?

3. What do you understand by the term ‘Version Control System’?

Version Control System (VCS) Records all changes made to a file or record so that you can recall a particular version later if needed.
This ensures that all team members are working with the latest version of the file.

4. What are the benefits of using Version Control System?

This command creates a copy (or clone) of an existing Git repository. Usually used to move a copy of a remote repository to a local repository.

6. What are the main differences between Git and SVN?

7. Name a few Git commands with their function?

9. What do you understand about the Git merge conflict?

Git Bash is an application that installs Bash, Git, and some Bash utilities commonly used in Windows operating systems. Git Bash allows you to work with Git items and repositories using a variety of commands.

11. What is the functionality of git ls-tree?

This command returns the tree object representation of the current repository, along with the mode and name of each item, and the SHA-1 value of the blob.

Tagging allows developers to mark all important checkpoints as the project progresses. You can use the tag name instead of the commit ID while the commit is checked out and pushed to the remote repository.

A copy of the repository is called a fork. Therefore, you can use a fork to try out changes without worrying about the original project. This process is ideal for suggesting changes to other projects.

14. What is the difference between git pull and git fetch?

Let’s say you’re a developer and want to switch branches to work on something else. The problem is that I don’t want to commit to incomplete work, so I want to get back to this point later. The solution here is git stash.
Git Stash retrieves the modified tracking file and stores it in a stack of unfinished changes that can be reapplied at any time. You can use Stash Pop to get back to work.

The Git stash drop command is used to delete stashed items. By default, the last added stash item is removed. You can also specify a specific item as an argument.
Give an example here.
If you want to remove a particular stash item from the stash item list, you can use the following command:

If you want to remove an item named stash@{0} use command git stash drop stash@{0}.

17. What is a detached HEAD and what causes this and how to avoid this?

If the HEAD is disconnected, it indicates that the currently checked out repository is not a local branch. This can happen due to the following scenarios:

To avoid disconnection, = instead of checking out commit / tag, you can create a branch starting from that commit and switch to that newly created branch using the following command:

This ensures that a new branch is checkout out and not a commit/tag thereby ensuring that a detached state wouldn’t happen.

Git Cherry-Pick is a command that allows you to select any Git commit by reference and add them to HEAD. Cherry picking is the process of picking a commit from one branch and applying it to another branch. Helps to undo your changes.

19. What do you understand about the Staging area in Git?

Git’s staging area starts tracking and saving changes that occur in your files. These saved changes will be reflected in your .git directory. Staging is an intermediate area that helps you format and review before the commit is complete.

This directory consists of shell scripts that become active when you run the appropriate Git command.
For example, Git tries to execute a post-commit script after commit.

SubGit is a tool used to migrate SVN to Git. Convert your SVN repository to Git so you can work on both systems at the same time. Automatically sync SVN with Git.

Git checkout allows you to switch between HEADs. It can also be used to restore a historical version of a file. This command works for files, commits, and branches.

23. What is the difference between git rebase and git merge?

24. What is the difference between resetting and reverting?

git reset changes the state of a branch to the previous state by removing all states after the desired commit, while git revert creates a new undo commit and keeps the original commit.

25. How do you configure a Git repository to run code sanity checking tools right before making commits, and preventing them if the test fails?

At First of all, I recommend you to introduce a little about the sanity check.
Sanity or smoke testing determines if it is possible and reasonable to continue the test.
Then, I will explain how to achieve this.
This can be done with a simple script that references the repository’s pre-commit hook. The pre-commit hook is triggered just before a commit, even before you enter a commit message. This script allows you to run other tools such as linters to perform sanity checks on changes pushed to the repository.
Finally, For an example. See below

This script checks if you need to pass the .go file you want to commit to gofmt, the standard Go source code formatting tool. By terminating with a non-zero status, the script effectively prevents commits from being applied to the repository.