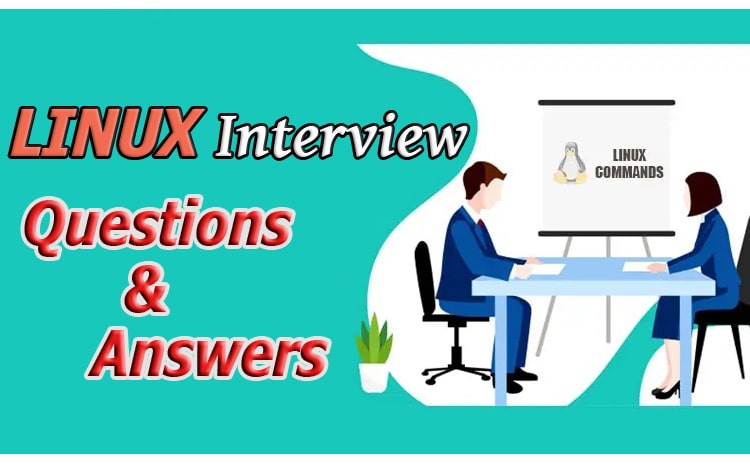 Did you know that more than 90% of the fastest computers in the world use Linux? No doubt the reason! Linux is fast, powerful and a favorite of engineers. If you want to be a Linux administrator, you’re in the right place to prepare for an interview. This article describes the most common and important interview questions and answers for Linux.
Are Interested in managing Administration? Enroll with our Linux online course.

1. What is the boot process on Linux?

These are the section that walks you through the Linux boot process.

2. How to create zero-size file Linux?

3. what is the main difference between a soft link and a hard link?

Here you will learn the main differences between hard links and soft links. The commands to create the links are:

The various differences between hard links and soft links are:

4. How to run a shell script in the background?

Crontab is a list of commands that you run on a regular basis and the names of the commands that are used to maintain that list. Crontab stands for “cron table” because it uses the job scheduler cron to perform tasks. Cron itself is named after Chronos, the Greek word for time. Cron is a system process that automatically executes tasks on a set schedule. The schedule is called crontab and is also the name of the program used to edit this schedule. Linux crontab format

6. How to allow the ports in Linux?

7. How to trouble shoot the remote server having some issue?

9. How to check all running services in Linux?

There are many ways and tools to check and list all the services running on Linux.
Most Linux administrators typically use “serviceservice_name status” or “/etc/init.d/service_namestatus” for System V (SysV) init systems and “systemctl status service_name” for systemd systems for specific services. To do.
The above command indicates whether each service is running on the server. These are the commands commonly used by Linux administrators. If you are new to the
environment and want to know what services are running on your system, read on.
The following command lists all the services running on the system and shows what the system is used for. It may also disable certain services that are not used by your system.
“init” (short for initialization) is the first process started when the computer system boots. init is a daemon process that keeps running until the system shuts down.

Many init systems have been developed for Linux, but the three most common and commonly used init systems are:

Locate the Process to Kill

The ps command displays information similar to top, but not in the form of an interface. Instead, the ps command provides a complete list of running processes, formatted based on the tags you add.

If you know a process ID, you can kill it with the command:

The kill command kills one process at a time using the specified process ID. Sends a SIGTERM signal telling you to stop the process. Waiting for the program to execute the shutdown routine.
You can use the -signal command to specify a signal that is not SIGTERM.

kill -9 is a useful command if you need to shut down a service that is not responding. Execute it in the same way as a normal kill command.

The kill -9 command sends a SIGKILL signal. This signal tells the service to shut down immediately. Non-responding programs ignore the kill command, but shut down when the kill-9 command is issued. Use this command with caution. Bypassing the standard shutdown routine, all unsaved data will be lost.
If the SIGKILL signal does not shut down the service, the operating system is not running properly.

13. How to check the CPU utilization?

Open a terminal window and enter the following:

The system should respond by displaying a list of all currently running processes. It also shows users, tasks, CPU usage, and memory usage.
This list can change frequently at the start and completion of background tasks. A convenient switch is to start from scratch with the -i switch.

This hides all idle processes and makes it easier to sort the list.
To exit the top function, press the letter q on your keyboard.

16. How to troubleshoot live logs?

Troubleshooting is one of the main reasons people create logs. If you encounter a problem, you need to diagnose it and understand why and why it occurred. An error message or set of events can give you clues as to the root cause, how to reproduce the problem, and help you arrive at a solution. This section shows scenarios where you can use Linux logs for troubleshooting.

We can troubleshoot live logs by using the following command:

The Linux SED command stands for StreamEDitor and is useful for a variety of common operations on text files and streams. Sed helps you select text, replace text, modify the original file, add lines to text, remove lines from text, and more. With
SED, you can edit without opening the file. It’s much faster to find and replace the file in the file than to first open the file in the VI Editor and then modify it.
Unix SED commands support regular expressions, allowing you to perform complex pattern matching.

The AWK command is used as follows:

The options can be:

20. How to check the running ports?

To check the listening ports and applications on Linux:

21. How to declare a variable in a shell script?

Variables are used to store any values. The value can be an integer, a floating point number, a character, or a string. You don’t have to write the data type as you would in a C or C ++ language.

These are the all valid variable definitions. Also, you do not need to specify the data type. The shell handles it automatically.

The general syntax is:

24. How to change file permission in Linux?

25. What is the purpose of export command?

The basic export command displays all the system’s exported environment variables. It will be executed as follows:

Consider a snapshot of the following output:.