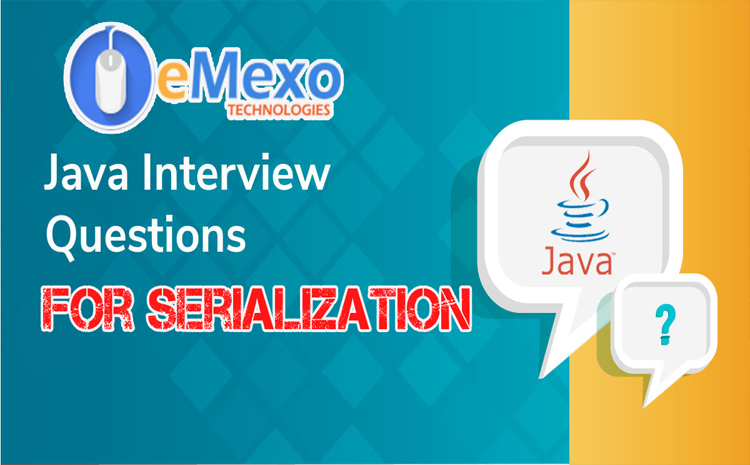 Serialization is an important topic in Java interviews. Java developers need to know the answer to the serialization interview questions.
In this article, we’ll look at the top Java Serialization Interview Questions with Answers. Covered questions for both beginners and experienced professionals.

Take this premier Java training in Electronic City Bangalore to learn about Java Programming. After successfully completing this Java certification training in eMexo Technologies, candidates can easily pass the certification exam. The average salary for Java practitioners is $ 73,743 per year. Don’t think twice, join us today.

2. How to make a java class Serializable?

3. Difference between transient and volatile in Java?

4. What’s a transient variable in Java?

5. Difference between Serializable and externalizable in Java?

6. How many methods does Serializable have? If no method then what is the purpose of the Serializable interface?

7. What is serialVersionUID? What would happen if you don’t define this?

8. While serializing you want some of the members not to serialize? How do you achieve it?

If you don’t want the field to be part of the object state, declare it as static or temporary as needed. That way, you won’t be part of the Java serialization process.

9. What will happen if one of the members of the class doesn’t implement a Serializable interface?

If you try to serialize an object in a class that implements Serializable, but the object contains a reference to a non-serializable class, a “NotSerializableException” is thrown at run time, so the code always has a SerializableAlert (comment section in my code). To Instruct the developer to remember this fact when adding a new field to a serializable class.

10. If a class is Serializable but its superclass is not, what will be the state of the instance variables inherited from the super class after deserialization?

12. Suppose the superclass of a new class implements a Serializable interface, how can you avoid the new class being serialized?

14. If you serialize and store a class in persistence, you might update that class to add a new field. What will happen if you deserialize the object already serialized?

16. Can we transfer a Serialized object via network?

17. Which kind of variables is not serialized during Java Serialization?