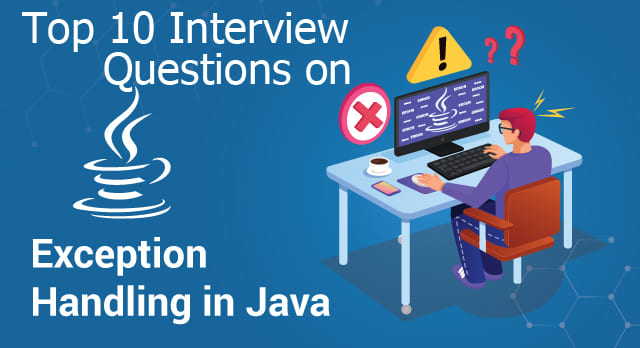 This is an article on the Top 10 Java Exception Handling Interview Questions for both fresh and experienced candidates to get you started with your dream job.

1. How to create a custom Exception?

2. What’s the difference between throws and throw keywords?

The throw is a statement and is used in a method to explicitly throw an exception.

The throws keyword is used by a method to specify which exceptions can be thrown from the method.

On the other hand, the throws keyword is used in the method signature.

Throw statement example given below:

Throws keyword example is given below :

3. What’s the difference between checked and unchecked exceptions?

4. What’s the use of finally block?

Case 1: When an exception does not occur

Let’s look at the following example. The Java program does not throw an exception and the finally block is executed after the try block.

Case 2: When an exception occurs but is not handled by the catch block

Let’s see the following example. Here, the code throws an exception however the catch block cannot handle it. Despite this, the finally block is executed after the try block and then the program terminates abnormally.

Case 3: When an exception occurs and is handled by the catch block

Let’s see the following example where the Java code throws an exception and the catch block handles the exception. Later the finally block is executed after the try-catch block. Further, the rest of the code is also executed normally.

4. What’s the use of finally block in Java?

5. How to catch the multiple exceptions in java?

6. Can we have multiple try blocks with only one catch block in java?

A Catch block cannot have multiple Try blocks. Each try block must be followed by a catch or finally. Still, trying to create a single catch block for multiple try blocks will generate a compile-time error.

For Example, Let us compile the following Java program that tries to employ a single catch block for multiple try blocks.

7. How to avoid null pointer exception in Java?

A Null Pointer Exception is a type of run-time exception that is thrown when a Java program attempts to use an object reference that contains a null value. The following scenarios can throw a null pointer exception.

1. The method is invoked using a null object

When you call a method on a null object, the program throws a NullPointerException. Consider the following example.

2. Passing a null object as an argument

You may get a null pointer exception if you do not check the null value in the method argument. Consider the following example.

3. Getting the length of a null array

Attempting to calculate the length of a null array also throws a java.lang.NullPointerException. Consider the following example.

The above program declares an array and assigns it null therefore No data. Using the length property on this null array throws a NullPointerException.

4. Synchronization on a null object

If you try to synchronize a method or block concurrent access, you need to ensure that the object reference used for synchronization is null. Consider the following example.

5. Tries to operate on the array object which is null

However, if you try to perform an operation on a null array, a null pointer exception will be thrown. Consider the following example.

8. Why use custom exceptions in java?

To create a custom exception, you need to extend the Exception class that belongs to the java.lang package.

Consider the following example. But in this example, we are creating a custom exception called WrongFileNameException.

9. Difference between NoClassDefFoundError vs ClassNotFoundExcepiton in Java?

10. Can we have a try block without a catch block in Java?

The final block is always executed, even if the method has a return type and the try block returns a value.